Back to Basics…Roasted Butternut Squash

Endurance. Sometimes the only difference between a win and a loss is one player’s or one team’s endurance. And Carolyn Pagnano, esteemed coach of our HS girl’s field hockey team, told me I had none. No endurance at all. She actually screamed those words ‘Annie! You have NO Endurance!’, at me as I ran laps with the other field hockey players. Carolyn Pagnano loved that drill – she would just yell ‘RUN’! And we all had to run. No defined distance or number of laps, no known end time…just ‘RUN’.  As I passed her on each lap I looked pathetically at Carolyn Pagnano hoping she would ‘call it’ and let us all stop running. She would just grin with evil and we ran on and on and on…

I wasn’t all giselle-like (animal, not Bunchen) – the girls who seemed to Penelope Pitstop their way through dozens of laps without breaking a sweat. Each stride for me was painful – horribly so. Admittedly, I’m dramatic…but it was torture. I hated running.

My lack-o-endurance spans beyond just running. I’m the charter member of the Coalition for Picking Up at 15. I believe that 15 holes of golf is enough.

That said, I am not a professional golfer and pretty much knew I wasn’t going to be a professional athlete of any kind from an early age (see previous post ‘You Will Never Be Gymnast‘).

So when the world’s most elite athletes look like they’ve joined my coalition for picking up at 15, it shocks me.

In some sports like golf it’s called getting the Yips. Letting nerves get the best of you and failing to find success in even the easiest of shots. But what happened on Sunday at the Ryder Cup was way bigger than just a team-wide case of the Yips! It was the biggest choke of all time. Granted, those darling Europeans (read ‘Sergio Garcia’) staged one of the greatest comebacks of all time, but no way they could have managed it without the monumental failings of US team on the final three holes of the course.

Veterans like Phil Mickelson couldn’t even pull it out. That’s right, Philly, hold your head in shame.

It was painful to watch. The complete unraveling of the entire team. The ultimate fail – inability to find just 4 wins out of 12 singles matches. No endurance on the final day of the tournament and now the precious Ryder Cup remains safely in the hands of the Europeans for two more years.

Watching it all unfold on Sunday, Carolyn Pagnono’s words rang in my head – ‘Annie! You have NO Endurance!’. And I realized, it’s not my strong suit. Even to this day there are things I hate to finish. Last week, I cut Squashweek short – promising more posts than I actually delivered. I just couldn’t bear the idea of one more squash dish.

But those golfers and their inability to finish what they started got to me. I had to prove Carolyn Pagnano wrong. I had one more squash in my kitchen and it had to be cooked – I owed it to my follower(s).

But I would have to dig deep. Deep into the annals of recipes to a time that was straightforward, simple and sugary….And last night I made…

1. Cut the top and bottom off of one butternut squash. Cut the bottom as evenly as possible as you need it to stand with little support for the prep.

2. Peel all of the thick skin off of the squash…I used a regular peeler, but if your peeler isn’t sharp enough, you may have to use a paring knife

3. Carefully! Slice the squash down the center…I used my Santoku knife…just make sure it’s a pretty big knife and sharp. Do no use a serrated or bread knife. I also wear a knife resistant glove…because I’m insane and have suffered some not so small cuts.

4. Remove the seeds and all of the membrane-y stuff from both halves 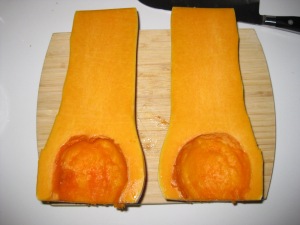 5. Carefully! Cut both sides into 1ish inch cubes and put into a bowl

Rejoice now that you have all of your fingers!

BREATHE – you have survived, hopefully, with all of your digits in tact. The hard work is over.

6. Toss the cubes of squash with…

Yummy goodness to toss with Squash

7. Spread the coated cubes in one layer on a large rimmed baking sheet lined with parchment paper…I do like the one that’s Reynolds Wrap on one side and Parchment Paper on the other..though it’s expensive

8. Roast in the oven for :45 mins, flipping the cubes about every :15 mins to ensure even baking

9. Remove from the oven, transfer to a serving bowl and top with freshly chopped parsley 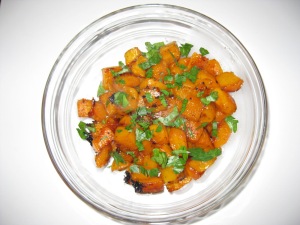 Call it the Yips or just a lack of Endurance – I wish the US Golf Team could have pulled it out and returned the Ryder Cup to the US.

It’s a funny thing, endurance. And to this day, I am still at times driven by a desire to prove Carolyn Pagnano wrong.

I was over squash. Facing that last squash and finishing SquashWeek was hard. But, then I remembered one of the greatest fictional sports speeches of all time – In A League of Their Own when Dottie tells Jimmy she’s quitting because it just got too hard, he says: ‘It’s supposed to be hard. If it wasn’t hard, everyone would do it. The hard is what makes it great.’

It was hard to complete SquashWeek – And this sweet and buttery butternut squash is what made finishing it great.