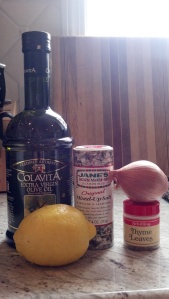 Ernest Hemingway’s ability to say so much in so few words strikes a spot in my soul. His style isn’t for everyone, but I’ve always loved his words. His last book was A Moveable Feast. Published in 1964, three years after Hemingway’s suicide, the book is a compilation of autobiographical stories that his widow and fourth wife, Mary Hemingway, culled from the author’s personal notes. The book chronicals Hemingway’s time spent in Paris beginning in the ’20’s with  the likes of Gertrude Stein, F Scott and Zelda Fitzgerald, John Dos Passos, James Joyce and others. About the city of lights, he told his friend and later his biographer, AE Hotchner: ‘If you are lucky enough to have lived in Paris as a young man, then wherever you go for the rest of your life, it stays with you, for Paris is a moveable feast.”

I think everyone knows of such a place – a place that stays with them forever. This past weekend, I was fortunate enough to be hosted by my friend, Sam, whose moveable feast is Nantucket. The tiny island off the elbow of Cape Cod isn’t everyone’s moveable feast…but, while up there, we did have a feast that moved. Sam’s sister who also has a home on the island arrived early Saturday morning after a 27 hour trek from Utah. With three friends coming to stay, she planned to host a barbecue at her home that night and invited us for dinner. Once settled in, Sam’s sister discovered her grill didn’t work…And at 4pm Saturday it was determined to move the dinner to Sam’s where we were happy to chef and host.

With only two hours and limited supplies, we created a truly impressive feast.

Flank Steak, marinated for two hours in a simple mix of garlic, soy sauce and olive oil. Grilled about 7 minutes per side on med/high heat and served sliced.

Boneless, skinless chicken breasts – seven medium sized. Whisk together a combination of 1 tbsp whole grain and 1 tbsp dijon mustard with the juice of 1 1/5 lemons and the juice of 1 lime. Once completely combined, slowly whisk in 1/3 cup of extra virgin olive oil.  Whisk until the mixture is emulsified and all bubbles disappear. Stir in about a tablespoon of dried thyme – crushed in your hands to release the flavor. Add my new favorite ingredient: Jane’s Krazy Mixed Up Salt. Pour over the chicken. Chiffonade a few basil leaves and add to the tops of the chicken. Marinade covered in the fridge for two hours.

Grill chicken for 5-7 minutes per side over med/high heat.

Corn on the cob -We soaked seven corns in their husks in water for about :30 minutes and then grilled over medium heat for :15 minutes. Let cool. Shuck and serve.

Roasted potatoes. To speed things up, I cubed a medium bag of yellow potatoes. In a bowl, I combined 1/4 to 1/3 cup Olive Oil, 1 large Diced Shallot, about a tsp of dried rosemary (crushed in my palms) and…1 tbsp of Jane’s Krazy Mixed Up Salt. This mixture was then tossed with the cubed potatoes and put on a baking sheet lightly sprayed with cooking spray. Into the oven at 450 for :45 minutes. Warning! Yellow potatoes have a higher moisture content than regular russet potatoes and will emit a good deal of steam in the oven. The steam will burst out and curl your eyelashes when you open the door – I know because it happened to me. Take caution.

It was a last minute move and a quickly prepared meal. The nature reserve that backs Sam’s property provided the perfect back drop on a cool and breezy but rainless Nantucket night. It’s nights like these that help us understand why, for many, Nantucket is a moveable feast. The guests had a great time and we came away looking like kitchen rock stars…Isn’t it pretty to think so? 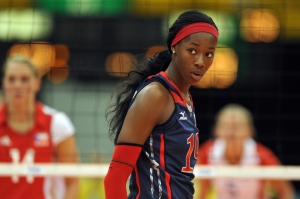 Destinee Hooker plays for the US Women’s volleyball team…At 6’4″ and 150lbs, she’s an intimidating presence on the team and one of the most talked about athletes at this Olympics. Destinee can jump 12 feet to attack a ball mid-arc.

It was the press coverage surrounding Destinee – well, actually, it was her name which I thought at first that I misheard – that made me tune-in to Women’s Volleyball the other day. I’m not well-versed in the sport. Outside of the accidental inclusion in a gym class game, my best experience comes from cringing when I remember the scene from Meet the Parents. During an intensely competitive game of pool volleyball, Ben Stiller’s character clad in ’70s Speedo slams a ball into the face of his fiancee’s sister breaking her nose just before her wedding. The cringing starts when Ben Stiller emerges from the dressing room in his Speedo and culminates with the super slo-mo shot into his sister-in-law to be’s face. OK…cringing now.

Pain is not really my thing and, as one of my friends aptly put it as we were watching the game (or is it a match in Volleyball???) ‘That looks like it really hurts’.

In addition to learning a good deal about Destinee and her fierce athletic ability, I also picked up a term or two while watching. Side-Out is when the serving team loses the point and must turn over the serve to the other team.

In honor of Destinee and all of the US Volleyball players – especially the men’s beach volleyballers – I am featuring a delicious and easy side dish:

When the pot comes to a boil, turn the heat off and cover the pot

After 12 minutes, remove the lid and extract the ears of corn

Allow the corn to cool slightly

While the oil is heating, carefully slice the kernels off of each cob and transfer to a bowl.

When the oil is just shy of smoking, add the kernels

Stir occasionally as the kernels toast in the Olive Oil

Once toasted to taste – Anne Burrell says ‘Brown Food is Good Food’ and I agree – remove from the pan and serve.