I don’t love sharing my age…and here’s what I will say: in the ’70’s I rocked a pair of moon boots. They were pretty much the most awesome moon boots ever. Striped in shades of the rainbow and puffily filled with polyester to keep me warm in the dead of winter, I was the envy of all my friends – at least that’s how I’m telling it. Moon Boots back then weren’t all techy like they are now. It was a free-love fashion statement for kids who were too young to know about free-love. Moon Boots showcased one of the iconic symbols of  the ’70’s – the rainbow. And we all wore our own twist of rainbow on whatever we could. 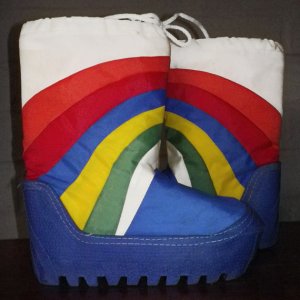 I liked a good fad. I still do.

So, when everyone was all like ‘OMG! Kale!’ and ‘Kale! The Amazing Super Food!’ Kale in many iterations started to appear on menus and people were comparing Kale recipes while boasting about how much Kale and how often Kale, I had to check it out.

While I’m not a salad fan…I do like a good bitter green – give me some arugula, spinach or even endives…and I’m good. Wait, I can put cheese on them, right?

But Kale? Kale…I just wasn’t sure. So I gave it a shot in what seemed to be the tamest form I could find: Kale Chips. Chips is one of my favorite words. What could be the harm?

2. Take 1 large bunch of Kale and remove the center vein. I used Russian Red Kale…Might have been a mistake.

3. Tear or cut (your call) the leaves into bite sized pieces and arrange on a baking sheet covered in tin foil and sprayed with an Olive Oil cooking spray. (Pam Olive Oil spray was on sale yesterday at Food Emporium – like $2 off on sale! – it’s the little things that make me happy) 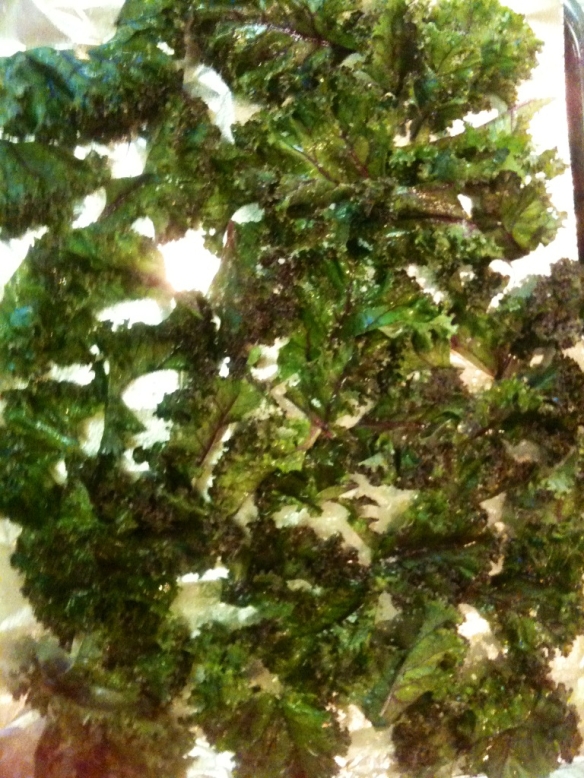 4. Spray the Kale pieces with Olive Oil spray and then sprinkle with sea salt

5. Put in the oven for 10-12 minutes – turning the pieces about halfway through the cooking process. Total cook time really depends upon your oven’s accuracy. Goal is crispy.

6. When they reach the desired crispiness, remove from the oven and carefully transfer to a serving bowl

7. Sprinkle with parmesan cheese and serve

But, probably the biggest selling point was that we all felt better. We felt better because we were eating the most super of Super Foods….

Like I said, I’m hip to a food fad and I’m not going to dis such a super food as Kale. So here’s what I’ll say – make sure you cook them to totally crispy and they mimic the crispy spinach at China Grill (though not as oily). Serve them alongside other appetizers and they’ll provide a nice, rich color to your assortment and make your guests feel better about eating snacks before dinner.