I recently found out that just before you’re served a raw oyster, that oyster is killed – mercilously ‘shucked’ and then arranged artfully on an icy plate of its recently murdered peers and served alongside an abundance of dipping sauces and lemons. I don’t know why, but I’d never thought about this when debating between the Malpec and the Fanny Bays…Go figure.

Could my insensitivity to the murder of oysters be a a direct result of my participation in the Lobster Hunger Games?

One of my earliest memories from childhood is racing lobster. No, we didn’t live in Maine and this wasn’t part of a state fair event. We didn’t raise racing lobster or live on a lobster breeding farm. These lobsters were purchased at the local fish monger, alive, and then carted home in a plastic bag. Lobster night was a big deal – An event that maybe happened once a summer and we all looked forward to it.

Back then, we had a large circular cement patio in our back yard. When the lobsters arrived from the monger, someone, I’m guessing my mother, would chalk a number on each one’s little crustaceous back. 1 through 6, one for each family member. Then, one of us would draw a large chalk circle on the cement patio. We’d each select one lobster from the pod. We would then name our prize lobster. Then: the naming ceremony, where we would proudly present out lobster to the group – usually Larry, Lenny, Lola or some other “L” name – our attachment to the crustacean deepened.

Next, crouched like Katniss I would place my lobster, Lilly-Lobster, in the center. My brothers, sister and parents would all do the same.

One! Two! Three! Release your lobster!

And – RACE ON: we’d all begin shouting our lobster’s name – urging our prize lobster to get to the chalk line first. I’d shout: Go Lilly! Go! As loud as I could while my siblings and parents urged on their own lobsters.

Get Get Get Lola!

You can do it Lisa!

We would continue shouting until one lucky lobster crossed the chalk line of the circle. Someone would claim victory and invariably chant a victorious chant or dance a victorious dance. Ultimate joy and bragging rights awarded to the winner!

But, this wasn’t the Hunger Games…It was a llittle darker. The rules in Lobster Hunger Games are different. And that joy was soon gone.

There’s no escaping death for the winner. All would go in, none would come out. The odds weren’t in any lobster’s favor.

Jubiliance was soon replaced by the inevitable end of any lobster tale. The water was already aboil by the time the Lobster Hunger Games were completed and a lobster had been named champion. You could see the steam from the water on the kitchen windows that faced the arena. And you just knew it was time. Nothing left to build on there.

The champion and the losers were carried by their ‘owners’ one by one toward the giant pot of boiling water. One by one we surrendered our prize racer to my father. One by one he lowered the Larry, Lisa, Lenny, Louie, Lola and lastly…Lilly into the boiling water.

We heard them cry.

The next swim Lilly would take would be into drawn butter at the dinner table.

It wasn’t until years later that I found out  that Lilly the Lobster had no nervous system, could feel no pain and that the sound of her cries as she was put into a boiling cauldron were actually just the sound of air hissing out of the space between her shell and meat.

Last night my friends and I turned the torture up a notch and went with the double kill for our feast.

1. In the bowl of a Cuisnart or any food processor, combine 2 sticks of butter at room temperature, 16-24 large leaves of basil chopped, 2 cloves of garlic and pulse until smooth

2. Slowly add the juice of 1/2 lemon and 1/2 cup of Olive Oil and pulse again until smooth. It will not be watery, but creamy. Set Aside.

3. Into the boiling water, add a palmful of Salt and four 1 – 1 1/2 lb lobsters ALIVE! Yes, this is the part where they die…One minute they’re racing to the edge of a chalk circle, the next they’re hissing in a cauldron of boiling water…

4. After 2 minutes remove the lobster and place on ice to stop the cooking process

Little Lilly in an Ice Bath

5. Savagely slice the lobsters down the back of the shell from tip to tail and remove any intestine-y stuff and any roe. Remove each claw and the spinnerettes. 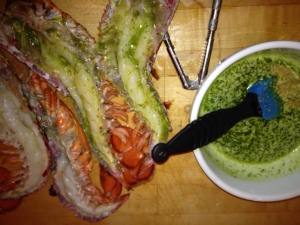 6. Take 1/2 of the basil/butter mixture and melt in the microwave or over the stove in a sauce pan.

Brush each open half of lobster with the basil butter and place the 1/2 lobster SHELL SIDE DOWN on the heated grill. Place the claws and spinnerettes on the grill as well

Disected Lobster on the Grill

8. Grill with the grill lid down for 5 minutes then flip each lobster and each claw and grill for another 5 minutes

9. Remove from the grill and serve with more melted basil butter

I’m not sure what it says about us that we named our lobsters and raced them in the back yard before sending them to their fiery death. I’m always amazed at what people are capable of. But, like Katniss – trained to kill in order to survive – the lure of lucious lobster boiled, grilled and then bathed in a lemony, garlicky basil butter could drive anyone to kill -kill lobster that is.

If it’s any consolation, we named our Thankgiving turkeys too…