In navigating the unknown, one good approach is to stick to the theme. I’m not suggesting that you sport tennis togs and carry a bunch of racquets when attending the US Tennis Open – that’s so Forest Hills. But I am saying, that you might not want to hang a crystal chandelier in your kid’s playroom.

The unknown can be especially intimidating when the unknown is what’s for dinner. Stick to the theme. So, if you’re cooking lasagna, don’t make a pork steamed dumpling appetizer. When making roast chicken, don’t serve enchiladas on the side.

Last night’s dinner was based on my attempt to go Thai. I had already decided to make something curry-ish as a main course. My girls were coming over to solve the world’s problems with wine and stories and wine and wine and I thought it was time to try something new.

But, I hadn’t figured out what to do for a vegetable side. I just couldn’t decide. I went to my mental rolodex and looked for what sides I had enjoyed when dining out at Thai restaurants….not really any that memorable. Some steamed veggies with an oddly slimy sauce and pepper flakes is really all I could come up with. And, since I don’t really want to know what’s in the oddly slimy sauce nor do I really like hot pepper flakes, that wasn’t going to happen.

When I left for Whole Foods, I had a list that said just ‘vegetable’. While I can ‘wing it’ in almost any situation, I’m not one of those people who decides what to make based on what looks good in the produce section that day. So this ‘vegetable’ item on the list unnerved me a bit.

Clutching my list, I battled my way through the tourists at the Time Warner Center and elbowed myself on to the escalator into Whole Foods. City-perfect bi-level shopping cart procured and I went straight to produce. It’s fall and the produce section is teeming with squash and I’m like so over squash – for now. I looked around and lamely decided upon broccoli – easy and generally a crowd pleaser. A total cop out – but it would have to do. I needed to find a bunch of other stuff that I hadn’t ever bought before.

As an afterthought, I grabbed a small carton of sprouts figuring that I could put them on top of the curry dish I was preparing. Because sprouts feel super Thai to me.

I got everything home and still felt a little bad about the boring broccoli.

Then while writing yesterday afternoon as The Food Network droned on in the background, I heard something that gave me an idea. Rachael Ray was making a sweet-ish (not Swedish) salad dressing. And, though I didn’t do what she did, I knew that Rachael was on to something. 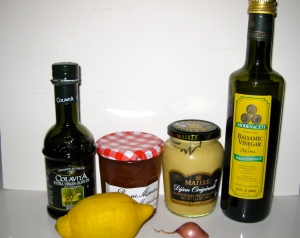 Mise En Place – doesn’t the shallot look like a mouse?

Whisk together until creamy looking then… 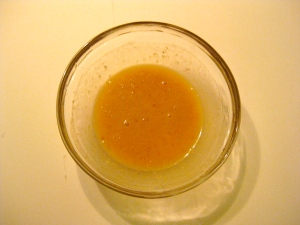 Mix the shredded veggies, nuts, sprouts and dressing together and serve as an intro to any Thai feast.

To be honest, the salad turned out to be the hit of the meal. The sleeper success of the supper, if you will.

So, when confronted with the unknown, stick to your theme. I had never cooked Thai before – but I had a theme. And, you know what? I found out that:  Annie can cook Thai. Annie cooked Thai real well.