This is Part 3 of how one can gain 15lbs during a weather disaster. [Click for Part 1 or Part 2.]

I think it might have been Halloween – but you’d never know it.

This had quickly become the routine in the days that followed the storm. The displaced downtowners were now taking up what seemed to be permanent residence on the Upper West Side.

I’m not overly generous but had given my bedroom to the displaced downtowner as she was rapidly becoming a disgruntled resident. To be honest..surrendering my bedroom was an entirely selfish act: the sight of an aero bed on my living room floor drives me insane. I knew that if I slept out there, the room would be returned to a livable state before my houseguest even stirred.

But, it was day 3 and the routine was getting old. We were running out of things to do. The restaurants, shops, sidewalks and streets were insanely crowded with all of those who had migrated north. TV showed only storm coverage and press conferences. We were bombarded with horrific sights of destruction and ruin.

We rented a movie to escape the images…but that only lasted two hours. As an aside, it was Moonrise Kingdom and was very good.

And, once it was over, we were back to the storm coverage, horrifying images and endless press conferences.

We all knew how fortunate we were. We were all incredibly thankful as we watched the images on TV. Still, the power-free set was getting anxious and a bit angry.

During the days it had become common for me to receive a call from someone else without power who just needed a hot shower. If only I known that hot, young, male downtowners would be gracing my UWS shower…

I tried to make my home as welcoming and comfortable as I could for others to enjoy. I even called my refrigerator the ‘Mini-Bar’.

I put out lovely arrangements of wine and nuts in my Williams-Sonoma star-shaped ramekins each evening at cocktail hour.

But by Wednesday afternoon, nothing seemed to help…and the downtowner was mad.

The anger came in flashes…but then became a constant.

I had stocked up on Evian prior to the storm (it was not only on sale at Food Emporium, but I wanted to ride out Sandy in style). After my guest asked for the fifth time which Evian was hers, I wrote my name on my bottle. I hoped this would help to avoid confusion. She looked at it in disgust and horror and said: ‘Really?’ 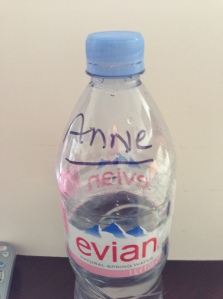 I had secured guests passes to my gym and when we were getting ready to go over there that day she looked at the bobby pin I used to keep the hair out of my face and said: ‘Seriously? Couldn’t you get a smaller pin with like…a flower or something?’

The sounds coming from my phone started to drive her insane. Any time the text ding dinged, she cringed. I silenced the phone.

There were bright times too. We broke into hysterics mimicking Boomberg’s announcements in Spanish and couldn’t contain our laughter as we watched the ASL interpreter sign his messages. We were getting exceedingly punchy.

Wednesday night we met some of the other displaced at Kefi for Greek food. I think meeting others in the same temporarily homeless situation was a comfort for my downtown guest. It became an impromptu support group for the three of them as over hummus and Tzatziki sauce they compared stories of their experiences. They were kind about the refuge we had offered, but they truly felt we flaunted our electricity and they couldn’t help but complain about non-downtown things like the multitude of stollers crowding the streets.

We hoped for a quick escape…

I tried to mix it up a bit. And, the day started with an early morning trip to see Anderson Live. I hoped that taking advantage of the many available seats to live tapings in NYC would break up the monotony and give us an escape from the horrifying images of destruction that were the only thing on television.

But, as the papers had warned on Sunday, there was no place to hide from Sandy.

The show on Thursday was an hour of commentary and images from Sandy. Anderson spoke live on the air with the Mayor of Seaside Heights, NJ. Mayor Akers took long breaths between sentences and then just broke down as he said to Anderson: ‘I think I’m just so tired.’ We cried. 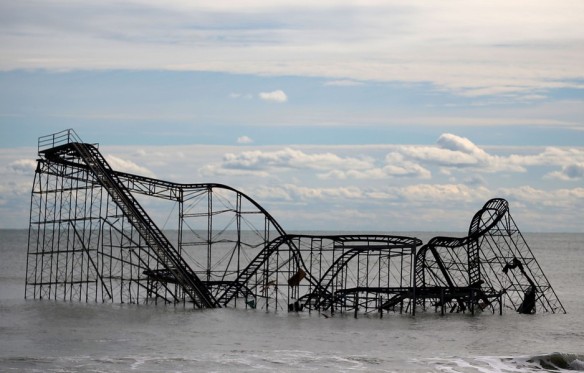 Thankfully, Anderson taped another segment after the Sandy show and we were finally given a moment away from the storm coverage. The segment featured two lovely southern women who have just landed a webcast. The webcast features the women as they go on ghost hunts – the schtick is that the women are afraid of ghosts and hope never to find one. Very funny. And a few moments without Sandy.

Taking The Edge Off

For dinner, we broke out and went South…Well, 50th St…but the west 50’s was now the new downtown. Cancun mexican restaurant. V good and well priced. There were three downtowners and two uptowners there. The margaritas helped to take the edge off a bit. As did the guacamole, enchiladas and my favorite: the chicken chimichanga.

We were rapidly approaching the Sandy 15.

There were rumors that the lights were slowly coming on downtown. Con Ed promised to have all power restored with limited exceptions in Manhattan by 11pm on Saturday.

We decided to celebrate and bring the week full circle with one last lunch at Cafe Luxembourg. No surprise…I had the Country Salad. It has lardons. Lardons – what’s not to love?

Later that day, though power was still out downtown, the disgruntled guest headed home. Hoping for the best and sporting the first genuine smile she had worn all week, she left.

I put my apartment back in order. I did laundry. I went to the gym. I sat in silence and thought about it all.

I spent the past five days off of the island – out of New York and away from the destruction. But, I have been having very vivid dreams of sheltering the displaced. Of howling winds. Of incredibly high tides. Of floods. Of storm surges. Of the darkness.

I know how lucky I am. For me, the worst is over. Taking in the power-free set was only part of what we, the fortunate, can do.

Sandy has taken enough from all of us. Now it’s time to forget about her and, start losing the Sandy 15.